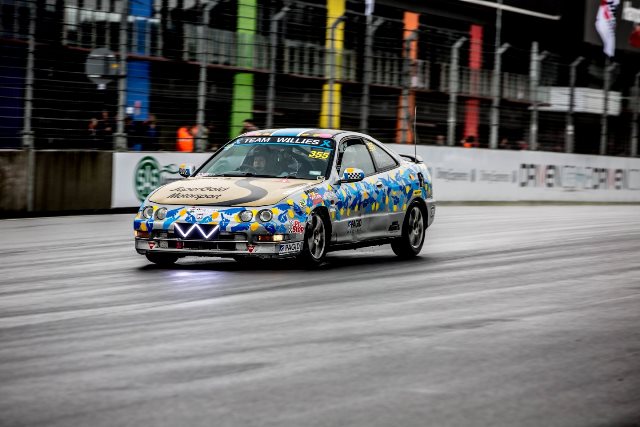 24 hours of Le Mans is a motorsport endurance event that has been held on the Circuit de la Sarthe in Le Mans France since 1923. Affectionately known as the Grand Prix of Endurance and Efficiency, a grid of around 60 high-performance (mainly European) cars take to the track for an uninterrupted twenty-four hours of thrilling racing at breakneck speed. Now, New Zealand can boast the same, well sort of

24 Hours of LeMons is an American idea that is based on the prestigious French race, but with ‘a twist’. Rather than teams spending millions of dollars on racing cars and all the support that comes with it, participants of the LeMons are expected to purchase a vehicle for under $1000, so in essence, a lemon. Safety is mandatory of course (Cage, Seat, Harness, Kill Switch, Extinguisher) this is a motorsport event after all, but ‘themes’ are almost as important, with penalties awarded to those not getting in the LeMons spirit. Participants are encouraged to be creative with their themes and nearly all teams seize the opportunity with both hands. From superheroes to cartoon characters, movies titles to traditional (but lampooned) costumes, LeMons has it all, with both car and drivers dressed to impress – especially since one of the biggest trophies is for best theme.

Penalties are awarded liberally throughout the event. From overly engineered vehicles (yes there are some teams that have juiced up their lemons), through poor driving skills, to ‘just because’, teams are subjected to brutal ridicule, race delays, humorous pit exercises and lap penalties, all of which can be reduced with judge bribes (with proceeds going to charity).

24 Hours of Lemons has been here in New Zealand for a couple of years now however, its format has been restricted to two separate 12 hour days over a weekend filled with fun and frivolity. This May saw history being made with the event becoming New Zealand’s first ever non-stop lemon endurance event and as such, attendance was at a record high.

At 3pm on a stormy Saturday, 52 cars took to the grid (some only barely) and drove through the night (and quite severe rain) to the same time the following day. In France, Le Mans begins with the waving of the Tricolor Flag and three jets flying overhead trailing Red, White and Blue smoke. LeMons had a black drone hovering above the rolling start and a camouflaged wagon spewing a trail of thick dark smoke from a giant missile strapped to its roof, at least that’s where we think it came from.

There were thrills and spills, laughs and maybe the odd tear as novices and professionals took to the Hampton Downs Motorsport Park tarmac for the arduous event, and against all the odds, nigh-on three-quarters of the field passed over the chequered flag. The overall stats were both mind-boggling and history-making. Most laps covered was 792, and since Hampton Downs is a tight 2.8km track, that makes it a whopping 2,218km at an average speed of 92.4kph – impressive when compared to the actual Le Mans, where racers will cover over 5,000 km on the fast paced 13.6km Circuit de la Sarthe.

Next race 24 Hours of Lemons NZ will be at Hampton Downs Motorsport Park in September and back to its weekend, two-day format, but we are reliably informed that the non-stop endurance event is planned to return again next year.

According to event organiser Jacob Simonsen ‘24 Hours of Lemons NZ is now a thing’ and having seen the number of teams that came out to support this, we can only agree. Maybe they will extend the invite to Hartley and Bamber next year – I think we’d all be keen to see their theme.