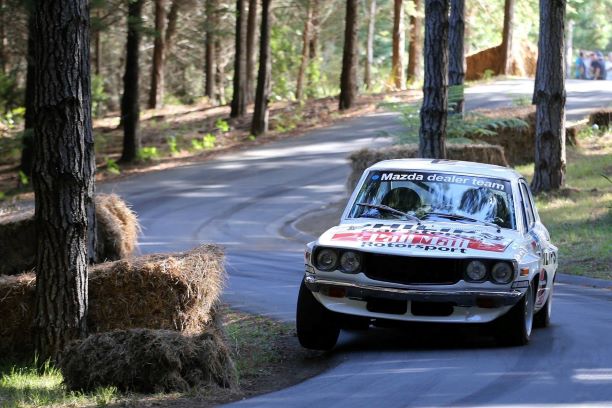 When it comes to motorsport, Rod Millen is quite frankly a New Zealand national treasure. With a racing career that began in the ’70s, his list of global achievements, both in and out of the car, spans the globe and includes everything from building race and concept cars, developing high-performance parts, super-touring driving, drifting to rally, off-road and hillclimbing – it’s the latter of which we want to talk about here.

With the first known race being held at La Turbie in France in 1897, Hillclimbing is arguably one of the oldest forms of motorsport. It’s an against the clock race, where the winner is the driver that can climb an uphill stage the quickest, with seemingly the more arduous and perilous the course gaining the biggest fame or maybe infamy. Shelsley Walsh in England lays claim to being the world’s oldest continuously staged motorsport event still staged on its original course (having been first run in 1905) but to names such as Chase the Dragon, Climb to the Clouds, Pikes Peak and locally, Race to the Sky held near Queenstown, are among the many that strike both fear and the ultimate challenge to all that dare to race them.

Which brings us back to Rod Millen and ultimately his Leadfoot Festival in Hahei. In the late ‘80s, seasoned driver Millen caught the hillclimbing bug. He won the Class C division at Pikes Peak in 1989, then returned to take out the Open Class honours in 1991 and Showroom Class in ‘92 before finally taking the hill’s death-defying 12.42mile, 156 turn, 14,115ft elevation record in ‘94 with a time of 10:04:06. And it’s this type of thrill and excitement that has been brought to Leadfoot.

Based on the Goodwood Festival of Speed, the Leadfoot Festival in ‘Millen’s Ranch’ (a 150-acre oceanfront and farm estate on the beautiful Coromandel Peninsula) is a motorsport event that should be on every petrolheads calendar. Originally, the event was staged to celebrate Rod’s 60th birthday in March of 2011. It was a fun and successful private affair for several hundred people that involved a Hillclimb race up the Millen’s driveway. However, after the completion of the event, the businesses of Hahei, Motorsport clubs around New Zealand and the general public asked Rod to consider making it a public event and thus the annual event in February began.

The mile-long (1.6km) driveway has been specifically designed to be the perfect hill climb, with fast straights, tight turns, off cambers and multiple undulations that head through unforgiving trees to help keep you focussed. Thanks to Rod’s history, connections and personal invitations, around 150 champion and competitive racers participate. The climb itself attracts many of the globe’s motorsport celebrities, driving vehicles from rare classics to the enviable ultra-modern, olden day formulas and road race cars to off-road machines and motorcycles, all showcasing an expansive range of horsepower and epic driving skills.

The weekend’s frivolities aren’t limited to the track either, spectators are invited to join in the fun by donning ‘30s -’70s period clothes, watching airshows and driving exhibitions, visiting the driving pits, paddocks and static displays, mingling with the racing stars, imbuing the atmosphere and ultimately, the Millen motorsport hospitality.

From its relatively humble beginnings, the Leadfoot Festival is now a celebration of racing heritage and all things motorsport.

Tickets for 2020 will undoubtedly go on-sale from August go to www.leadfootfestival.com for details.