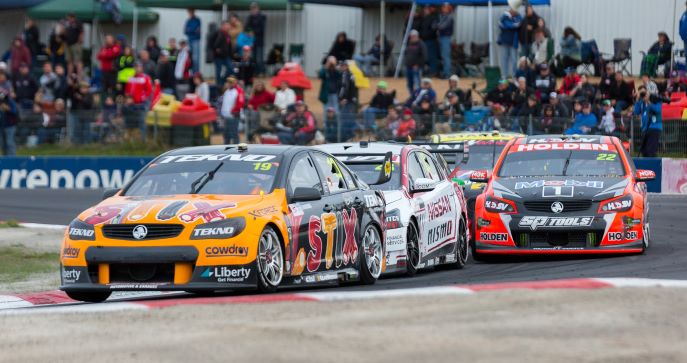 The essence of the Supercars Championship

The rivalry between Ford and Holden at the V8s has been a well-fought and well-documented affair over decades of Trans-Tasman motorsport racing, however, the now-named V8 Supercars Championship can trace its roots all the way back to 1960 and an NSW racing circuit named Gnoo Blas.

Set in the heart of Orange in rural NSW, the inaugural Australian Touring Car Championship (ATCC) was in actual fact a one race multi-brand event, created to embrace the increasing popularity of passenger sedans and a race that was won by David McKay in a Jaguar 3.4L.

The race grew in popularity and in size and by 1964, it had moved from rural racetracks to its first major circuit, Lakeside Raceway near Brisbane. Ian Geoghegan won the race there in a Ford Cortina and incidentally, it was the first of the ATCC races not to be taken out by Jaguar.

1969 saw the single-race Championship become a ‘Series’ and thanks to the ‘Supercar Scare’ (Ford, GM and Chrysler looking to build road-going supercars for the public in order to race at Bathurst) in the previous year, 1973 had Group C and E racing series merging to form one single touring class and arguably, witnessing the beginning of the ongoing Ford/Holden rivalry (thanks to Moffat and Brock).

For well over a decade, Alan Moffat (Ford) and Peter Brock (Holden) fought hard on the racetrack, racking up multiple poles, wins and Championships between them and fueling the consumer’s passionate fire between the Commodore (Police Car) and the Falcon (Taxi) along the way.

In 1995, 2.0-litre cars, now contesting their own series as Super Touring cars, became ineligible for the ATCC, effectively leaving the Series solely in the duelling hands of the 5.0-litre Ford and Holden models, (where it remained until 2012). Even despite the ATCC name drop at the end of the 1998 season (now being known as the Supercars Championship), the legendary on-track feuds between Johnson/Brock, Ambrose/Murphy, Winterbottom/Whincup, Seton/Skaife, McLaughlin/van Gisbergen, Aussie v Kiwi, Aussie vs Aussie, Kiwi vs Kiwi, continued, with them all battling under the Red vs Blue banners of Holden vs Ford.

Although most of these battles have been fought in Australia, the V8 skirmishes were not exactly uncommon here in NZ either. Many years ago Pukekohe was the venue for New Zealand’s premier production car race, the Benson and Hedges 500 mile race (later 1000 km) featuring drivers such as Peter Brock, Dick Johnson and Jim Richards. Then, the annual round of the Australian V8 Supercar race was held there from 2001 to 2007 and then later returning there in 2013. Now it has been announced that Pukekohe will be the venue of the Supercar Championship every ANZAC day, beginning next year.

2013 was another milestone year for the Series, being the first year of the Car of the Future (COTF) platform. These cars are lighter, more economical, have increased agility and are arguably more competitive than their predecessors, creating better racing. It has opened up the Ford vs Holden battleground to other manufacturers again, with Nissan now active in the Supercars Championship with its Altima and the new Gen2 regulations set offer further scope. Although it’s clear to see that the Ford vs Holden spirit remains alive and kicking.

In NZ, the Commodore is still the ‘goto’ vehicle for the police, however, Uber drivers seem to prefer a Prius. I wonder, if the ATCC (Police vs Taxi) began today, would it last nigh-on six decades too?